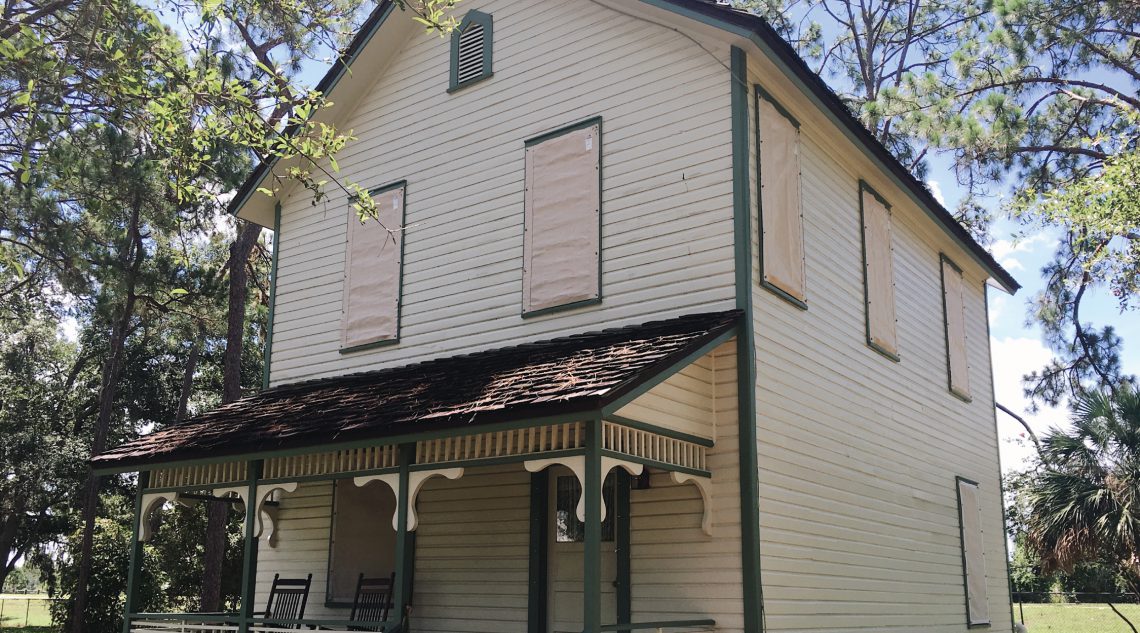 Step back in time and experience what life was like for Florida families in the 1800s and early 1900s at Heritage Village in Largo, FL.

Heritage Village is a collection of more than 25 historic structures and features originally built all around Pinellas County. At various times they have been relocated to the park to create a 21-acre living history museum.

The park is mostly self-guided and you are able to explore inside the majority of the buildings at your leisure. There are also a few houses where you can take a guided tour to see the rooms up close and learn more about the history of the families who lived there.

The buildings are filled with artifacts and authentic items that might have been used during the time. Inside the visitor’s center you can find museum exhibits filled with even more items like dishes, postcards, household appliances and more.

But the best part about Heritage Village is that it’s completely free! There is no cost for parking, admission or guided tours, although donations are appreciated.

Heritage Village has limited hours. It is open from Wednesday – Saturday from 10 am to 4 pm, and Sundays 1 pm to 4 pm. It is closed on all county holidays.

While there are paths around Heritage Village, they are mostly brick or dirt. Be careful on the brick paths because they can be uneven. There is also a nature trail you can enjoy to see native plants and pine flatwoods. Wear good shoes for lots of walking!

Below are descriptions and history of some of the buildings found at Heritage Village.

Built circa 1896, this middle class house was one of the few in the Pinellas area to have modern conveniences such as running water, electricity and an elaborate indoor bathroom. This homestead-style house is a middle class suburban variation of the farmhouse. This is one of our favorite houses in the park. Its cool to see that the family had such luxuries as a nice indoor bathroom, built-in closets in each bedroom and four brick fireplaces!

Early church members included pioneer families of the upper Pinellas peninsula, including the McMullens and the Booths. The methodist congregation hosted many social events such as coffee hours and potlucks. The simple wood frame structure emphasized function rather than elaborate ornamental design. Unfortunately, the wooden structure did not make for a very sturdy building. During a hurricane in 1921, strong winds lifted the entire church off the ground and repositioned it elsewhere on the property facing a new direction.

This is one of the homes with a guided tour. Tickets are free but must be picked up in advance from the Visitors Center. You’ll get to go inside and see tons of neat stuff from an authentic stove to traditional bathing costumes.

This house was built in 1907 on the bluff in downtown Clearwater. From it’s wrap-around porch, residents enjoyed magnificent views of Clearwater Bay and the developing city. For six decades many families and people made this place home. From 1925-1943 it was a boarding house for single adults, binder boys and winter residents.

Built in 1852, this cabin is the oldest existing structure in Pinellas County. James and Elizabeth McMullen built this 1 1/2 story log cabin near Alligator Creek, part of present day Clearwater. They raised livestock and farmed, growing a variety of crops including cotton. Their cattle ended up on dinner plates throughout the South, and even Cuba. Elizabeth Campbell McMullen was probably the first midwife in the area. By 1900, this cabin witnessed the birth of nearly 60 children.

For those of you familiar with the area, it is said that one day James and his friend Richard Booth together carved a pathway through the brush between their cabins. It is now part of McMullen-Booth Road and is considered the first Pinellas road built to surveyors’ specifications.

In 1908 the quickest way to get from Tampa to upper Pinellas was to catch a steamship to St. Petersburg and ride the rails north to Tarpon Springs. In 1910 a new rail line connected Tampa and north Pinellas and workers built a small train depot for Sulpher Springs known as Gulf Coast Junction. During the 1920s land boom, the Tampa and Gulf Coast Railroad built this new larger depot. Early trains traveled at a crawl, rarely faster than 12 miles per hour to make sure they did not jump the tracks.

This is the only structure brought to the village from outside Pinellas County.

Between 1900 and 1920, St. Petersburg’s population soared from 1,575 to more than 14,000. This store opened in 1915 in the Mound Park neighborhood to serve blossoming nearby communities. Shoppers came to this small store because it had it all — groceries, clothing and other necessities. The store also houses a barbershop and a service station and garage, with an authentic original Ford Model T.

Bring some cash along if you’d like to purchase and enjoy a cold refreshing Coke in a glass bottle, straight out of a working period ice box! The clerk will cash you out on an original working cash register. Definitely a cool experience for kids (and adults!)

This is another house that offers guided tours. The Walsingham house was originally built and occupied by Jesse Walsingham, whose occupations varied from delivering ice to managing a hardware store to growing citrus.

At Heritage Village the Walsingham home is interpreted as a doctor’s home and office. Though the house never actually served as a doctor’s office, today there are authentic medical tools and equipment on display set up how it might have been in the time period. Doctor’s had to know a bit of everything back then from optometry to x-rays to childbirth.

This warehouse was operational from around 1930 to the mid 1970s. Divers brought natural sponges collected from the coastal waters off Tarpon Springs to this warehouse to prepare them for market. Workers washed, dried, clipped, sorted and packaged the sponges into bales. After World War II, less expensive synthetic sponges combined with periodic blights that wiped out much of the Gulf’s sponges, led to a gradual decline in the local sponge industry.

Besides everything listed here, Heritage Village is also home to a smoke house, sugar cane mill, a barn with wagons, two schools, a boat shop, bandstand and more.

Demonstrations occur at the village throughout the year and during special events. Check the Pinellas County website for more details.

To make a full day trip out of Heritage Village, we suggest bringing a picnic lunch and spending the rest of your day roaming around the Florida Botanical Gardens. The gardens are right next door (you won’t even have to move the car) and are also completely free!

How To Prepare for Florida Hurricane Season