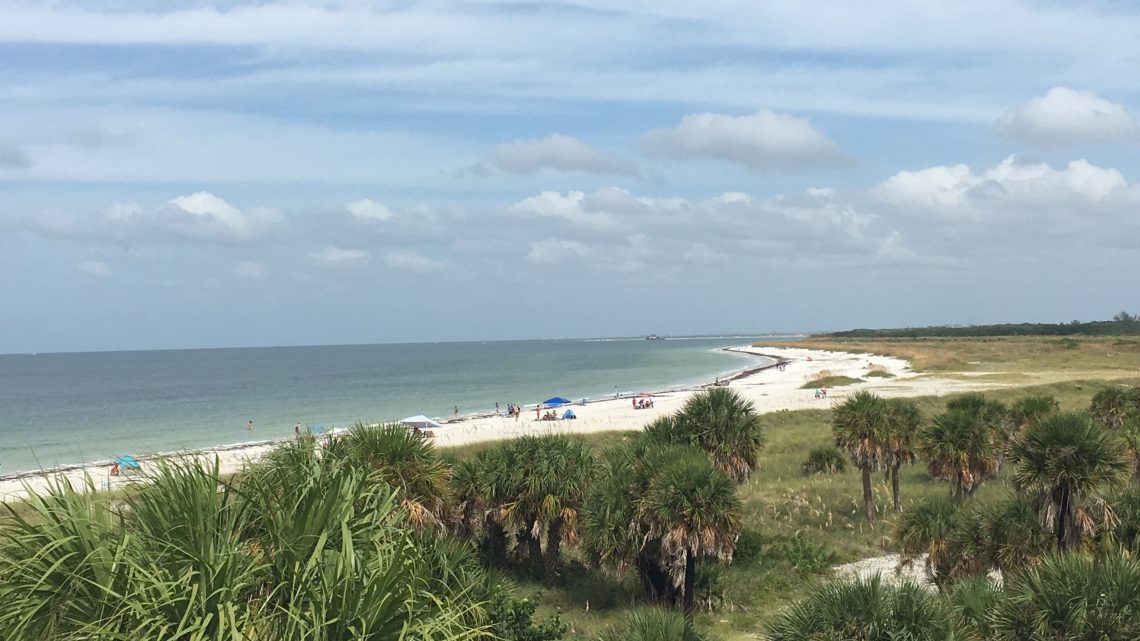 Fort de Soto Park is on the southern tip of St. Petersburg. The park features beautiful Florida gulf coast beaches, nature trails and remains of a historic fort from the Spanish American War era. Fort De Soto park consists of 1,136 acres made up of five interconnected islands or keys.

The history found in the park is a huge draw. Much of the historic fort is intact, despite being abandoned for most of the 20th century. The fort has hallways and rooms you can go into and explore. Plus you can go to the top of the fort for a bird’s eye view of the surrounding area and the beach.

With the United States’ entry into the Spanish American War in the late 1800s, Tampa residents wanted more protection for Tampa Bay. Construction started on the fort in 1898 and it was named in 1900 after famed Spanish explorer of Florida, Hernando De Soto.

The post consisted of 29 buildings including a hospital, barracks, blacksmith, messhall, and more. Two 12-inch coast defense mortar batteries, Batteries Laidley and Bigelow, were an impressive part of the post.

The post was active from 1898 to 1910. Until 1923, a large caretaker force of privates and officers remained at the fort in some capacity. But finally in 1923, the post was officially abandoned, and just one caretaker remained. The fort never saw any battles, and in fact the weapons were never fired in combat.

In 1948, the area was purchased by Pinellas County and declared a recreational area open to the public. In 1977 the Fort de Soto Batteries were placed on the National Registrar of Historic Places.

The four 12-inch mortars are the only weapons of their kind left in the United States. The mortars are in their original positions around the fort. The massive mortar took a 12-man crew to load and aim. It had a maximum firing range of 6.8 miles!

A small museum provides information about the history of the area and the fort, as well as some artifacts found on the site.

Getting to Fort de Soto Park

For any visitors coming from I-275 there will be two toll booths on the way into the park. The tolls will run you $1 and $0.75 (as of September 2019). Change is provided at both booths.

There is also a $5 entry fee per car at the park.

You may be thinking the costs are stacking up, but less than $7 for a whole day in the park is very inexpensive next to the hourly prices of parking at other beaches in the area. St. Pete Beach parking will typically run you $2.50/hour on the weekends, assuming you can even find a parking spot. Not to mention all the other activities available at this Fort de Soto Park.

One of our favorite things about Fort de Soto Park is that there will almost always be an abundance of beach parking. There are multiple lots and the beaches usually aren’t crowded.

There is no shortage of things to do at Fort de Soto Park. The beaches are absolutely gorgeous and mostly unspoiled. At this park you’ll find a scenic natural background for your beach day, not high-rises.

Exploring the fort is a great way to spend the afternoon before dipping into the ocean to cool off. You can wander around the various rooms and hallways and view huge mortars and guns. We recommend bringing along this printable map and guide from Pinellas County. Signage at the fort is a little lacking, so it’s helpful to have a guide to know what you are looking at.

Other Things to Do at Fort de Soto Park

Another big draw of Fort de Soto Park is the dog beach. There are only a handful of designated dog beaches in the Tampa Bay area, so this would be a good place to visit with your furry friend. It’s also a great place to go for a walk on one of the several nature trails.

The park boasts a 7-mile paved all-purpose trail that connects the camping area, boat launch and beaches. There are also two shorter nature trails that give you a glimpse of the diverse plant and wildlife in the area.

One unique feature is a self-guided “Barrier Free” interpretive trail that provides access to nature for all visitors of Fort De Soto Park, regardless of their physical abilities. Some features include raised edges on the path, informational signs with audio, benches and water fountains, and more.

Other notable amenities at the park include two fishing piers, boat launch, kayak and canoe rentals, bike rentals, concessions and souvenir shop, museum, ferry service to Egmont Key State Park and Shell Key Preserve (both accessible only by boat), picnic benches, shelters and grills, and a 238-site campground with facilities.

We highly recommend visiting this park if you are in the area. It’s a great way to visit our amazing gulf coast beaches in a more natural setting. This is a very family-friendly park with lots to see and do. Have you visited Fort de Soto Park? Or what is your favorite Florida beach?

How to See Manatees in Florida